AAWE was a proud exhibiting partner of this year’s event.

BLOOM WHERE YOU’RE PLANTED is an orientation seminar to help expats from around the world live and thrive in Paris or anywhere in France, and is designed to create opportunities for meaningful connections with others and provide valuable insights.
If you’re planning on—or even thinking about—creating a new life in France, Bloom Where You’re Planted is a wonderful way to  learn how to make the most of a new life:

Check back for 2021 dates. We will post them as soon as they are released.
International University Fair Western Europe

Meet with admissions representatives from over 200 universities in 20 countries, who are interested in the achievements, behaviors and skills that you have to offer their institution and who wish to support you with your transition to university.

AAWE Revised Edition of Beyond the Bac

AAWE has the perfect companion to the CIS University Fair – our second edition of Beyond the Bac – Higher Education in France and Abroad (Feb. 2020). 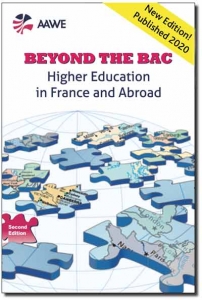 Purchase Beyond the Bac

Considering higher education internationally or in France? Thinking about a gap year? Need help to navigate your journey to university, despite the lack of campus visits during the pandemic? Beyond the Bac – Higher Education in France and Abroad has a wealth of information and one-stop resource to navigate your university choices.

Looking Beyond the Bac

• Thinking Ahead: Keeping Your Options Open
• The Gap Year

Black Paris and the Myth of Colorblind France

Co-sponsored by AAWE and MESSAGE

Dr. Monique Y. Wells, co-founder of Entrée to Black Paris™ and co-author of Paris Reflections: Walks through African-American Paris, presented African-American and African diaspora history and contemporary life with an emphasis on the 20th and 21st centuries. The talk was followed by a question and answer session.

Dr. Wells has delivered this lecture for Paris excursions organized for a score of university study abroad groups and African-American travelers. She has also given it for numerous institutions in France and the U.S. including the American Library in Paris, Barnard College, Howard University, Rice University, and the Alliance Française of San Francisco.

To learn more about Dr. Wells and her work please visit her website.