Jazz Concert at the Bal Blomet

Le Bal Blomet (www.balblomet.fr) was created in 1924 and was quickly called Le Bal Negre. It was an amazing spot that, fortunately for us, was restored and reopened in 2017. A musician who played there in the 20s said, “This period probably was the craziest that I have lived. That ball was the hot spot of the capital… And not a single foreigner would leave Paris without having spent at least one night in this unusual place.” Tourists did indeed show up by the busloads. “The address had become so famous in Paris that we only had to tell a taxi driver ’33…’ for him to add ‘…rue Blomet.’ “ Artists of the Roaring Twenties attended the Bal Blomet religiously, including Joséphine Baker, Maurice Chevalier, Mistinguett, Foujita, Kiki de Montparnasse accompanied by Man Ray or Alexander Calder. Henry Miller, Ernest Hemingway, Francis Scott Fitzgerald would gather there, as would painters Joan Miro, Francis Picabia, Jules Pascin, Moise Kisling and Kees Van Dongen accompanied Robert Desnos and their surrealist friends.

Join us for an evening of jazz, featuring clarinette favorites. 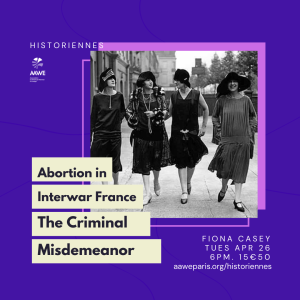 The Criminal Misdemeanor: The Story of Abortion in Interwar France

We are delighted that Fiona Casey, Doctor in Contemporary History at the Ecole Supérieure d’Agricultures in Angers, will be sharing the topic of her doctoral thesis with us. It touches on many themes related to women during our chosen period. These themes include the impact of World War I on French women, the history of sexuality, French feminism, the roots of Vichy, and more! 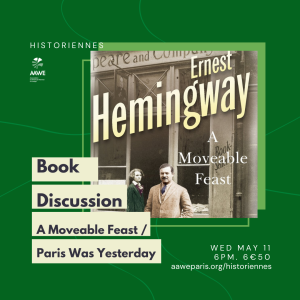 Many of us may have read Hemingway’s iconic book and may want to re-read it or… read Janet Flanner’s account of life in the Paris over some of the same period. Here’s what Shakespeare and Company say about Flanner’s book: In 1925 Janet Flanner began writing a fortnightly ‘Letter from Paris’ for the nascent New Yorker….to tell New Yorkers, under her pen name of ‘Genet’, what the French thought was going on in France, not what she thought. Paris Was Yesterday …. reads like an Arts Who’s Who. Flanner saw it all and knew everyone (or at least all about them), and there are tidbits galore about the likes of James Joyce, Ernest Hemingway, Isadora Duncan, Diaghilev, Gertrude Stein, Scott and Zelda Fitzgerald, Picasso, Marlene Dietrich…It’s witty, catty, literary and unashamedly gossipy, a lively portrait of the thriving cultural life in Paris between the wars. In the brilliantly entertaining style she made her own, Flanner mixed high and low culture to devastating effect.” So read one or both books, or just tune in for a lively discussion! 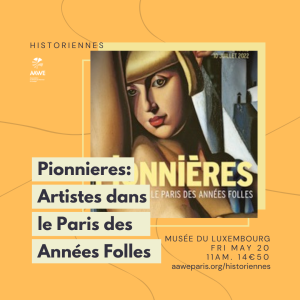